Today I am delighted to welcome a new face to the Blog. My good friend John Scotcher will now be a regular contributor to the blog as our resident film reviewer. So far my lovely husband Nik has been covering TV and book reviews but not film so I felt there was a bit of a gap. John is a film expert and an avid writer (he has his own novel coming out at the end of the year) so he has the perfect credentials for this role. I have also known him for 23 years now (wow that make me feel old!) so it is lovely to have him here writing for you all.

I’ll pass you over to John and he can tell you all about his experience watching Pompei!

Welcome to the first of what I hope will be a regular film review column. I recently treated myself to an ‘all you can eat’ film pass with a national multiplex, so I have no excuse not to see everything that comes out. As going to the cinema alone is potentially an odd way to spend an evening, I’m justifying it to myself by documenting the experience for A BohoLife.

I’ll do my best to give you a reasoned opinion that tries to tell you about the positives as well as the negatives, so you can make a reasoned decision as to whether you want to spend your hard earned pounds on a big screen ticket. Unfortunately, as I am starting with the leather and lava disasterfest that is ‘Pompeii’, I’m going to struggle quite a lot with the positives, but lets see what we can do. 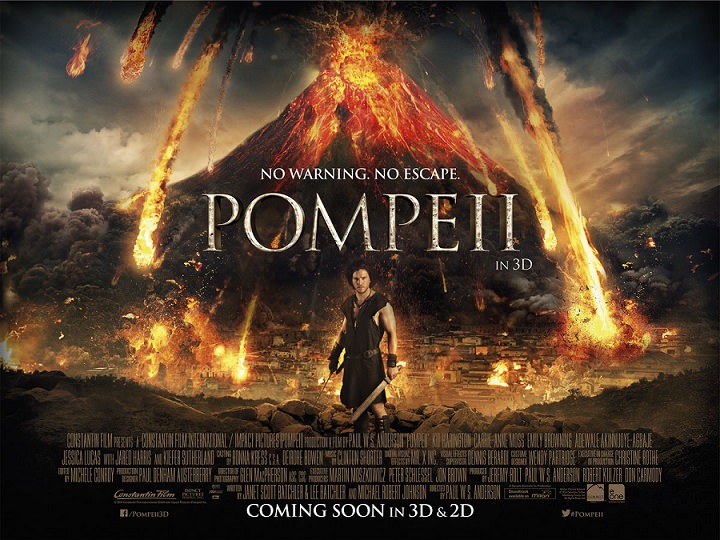 Ah yes! One positive has just sprung to mind about Pompei; it now holds the honour of being my new worst film of all time. In the past this particular accolade has been held by such films as “Pearl Harbour”, the DiCaprio version of “The Three Musketeers” and the eternally awful “Jaws – the Revenge”. Pompeii trumps them all. It actually manages a rare thing, a consistently awful combination of bad acting, bad script, bad CGI and bad direction all in equal measures. In other words I enjoyed giggling through pretty much every minute.
I started sniggering within the first five minutes during the inevitable back story. Here we see our young hero’s parents murdered as the Roman Empire comes to have a pop at his horse loving Celtic tribe. We also meet evil “Senator Corvus” for the first time as played by Keifer Sutherland, at this point not too hammy, but don’t hold your breath – more of that later.

Now, of course this film is a blockbuster and thus we have eye-candy for both the sexes. For the women, Kit Harington. Up until now, Kit has been a rising star with his great portrayal of “John Snow” in HBO’s “Game Of Thrones”, so it follows that he would make the move to the big screen. For Pompeii, he has bulked up considerably and it may well be that this has effected his usually wider acting range. Here however, he wavers from ‘frowny sexy muscley Kit’ to ‘really frowny sexy muscley Kit’ and occasionally pushes the boat out to ‘frowny sexy vulnerable Kit’ (but only when he is talking to his love interest).
That love interest is Emily Browning, also providing the eye candy for the men in the audience. Emily’s lips fascinate me. I have seen her in other films, most notably ‘Sucker Punch’ and ‘Summer In February’ and thought her to be very good. Here in her largest role to date, she is not. She engages in what I can only term ‘lip acting’ – basing the level of her emotion on how much they quiver in any given scene.

I do feel a little bad being harsh about the leads. As I have said, I like them in other things and hope very much their performance in this was hampered by both the script and direction. Certainly the supporting actors are forced to be just as hammy by their lines, making me think this was a case of good actors being forced to do bad things. Until that is, there was more of Keifer Sutherland.
Oh bless him! Did no-one take him aside and have a quiet word? Surely someone could have said “Look Mr. Sutherland, you were super in 24, but you need to stop what you are doing here right now!” Apparently not. Keifer plays Senator Corvus as the bastard son of James Mason and Dale Winton, borrowing heavily from the vowel sounds of Lloyd Grossman. I haven’t heard laugh out loud reaction to a ‘serious’ film in the cinema for ages, but a number of his scenes got them, and not just from the people I was with.

Of course, all of the story was simply the precursor to the main event; the erupting of Vesuvius and subsequent destruction of Pompeii. Perhaps, the characters were made ridiculous so that when they eventually got fried, the audience wouldn’t care. I for one was rooting for the fireballs.

I would be doing the film a disservice to say all the CGI is bad. Certainly the erupting of the mountain was done very well. I saw this in 2D, but expect 3D would have added considerably more thrills, though not enough to save the film. Where I struggled was with some of the more intimate CGI shots. The moments where our heroes are running away from a fireball, or a tidal wave, or a cascade of lava, or Keifer’s acting, didn’t quite seem to marry the foreground with the background believably. There were moments where I was reminded of the early cinema trick of playing an actor in front of a screen with a film on it and hoping the audience would think he or she was there.

I could go on about this all day. I actually want to see it again, though only to take certain friends and watch them watching the film for their reactions. That’s just me however. Let’s think about you.
So in conclusion I DO urge you to watch this if you want to giggle at how not to make a movie. Should you pay eight odd quid to do that at the cinema? Probably not. This really should have been a ‘straight to download’ film anyway. So save your money, or better yet, donate it to Keifer, he may never work again.

Next week I am going to see ‘The Other Woman’. Even though I am likely to be the only single bloke in a cinema of couples, I thought I should try and redress the balance and find something you’ll actually want to see. I’ll look forward to telling you all about it.