Today we see the welcome return of John in our film review slot. John has been off for a few weeks recovering from an opperation, but he is back fighting fit and has been off to the cinema for us to review another film, and it looks like todays is a good one!

I’ve been missing out on the cinema recently.  I’ve been recovering from a double hernia operation (I was only expecting one – I suppose I should be grateful they did it in one go).  Thus I wasn’t driving for a few weeks and wasn’t able to get in front of a big screen.  I consoled myself by taking Mr. Nick Hood’s recommendation from one of the earlier posts on ‘A Boho Life’ and settled down to do the whole of ‘Breaking Bad’.  As no one else was in at the time, like BB’s hero, I spent much of the time in just my pants.
Now I’ve spoiled your day with that image, you’ll be delighted to know I am driving again.  So last night I put additional clothing on and returned to the cinema.  After something as unashamedly dark as Breaking Bad, I thought I’d better find a nice light rom-com sort of movie to redress the balance.  Hence, large fizzy drink and box of dry triangles claiming to be nachos in hand, I settled into seat D10 (sadly, my favourite) to watch “Begin Again”.

So, before I tell you a little about it, I’ll unusually start with my conclusion.  Go see it.  Go see it this week.  It’s my favourite film of the year so far.  Take a partner, or a parent or even an older (teenage) child. I think you’ll find they will come out happy. 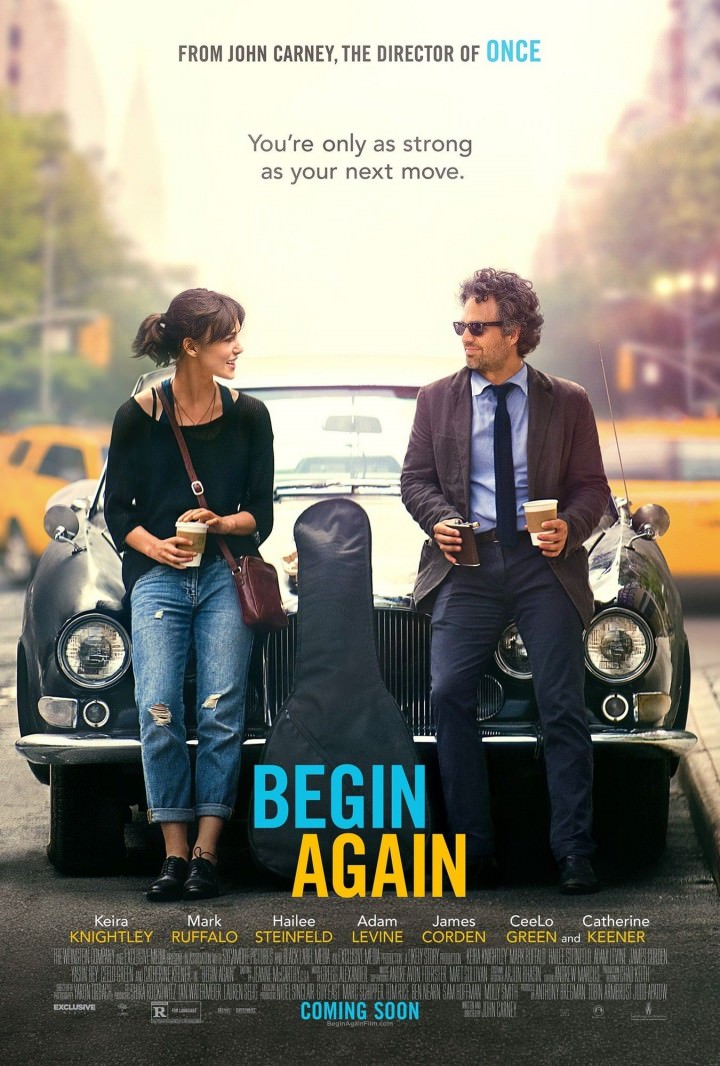 Ok – a quick premise.  Kiera Knightly is in her element as waiflike English muso in New York, ‘Greta’.  She’s just been dumped by her up and coming rock star boyfriend.  She is about to head back across the pond to the safety of England and crumpets.  On her last night, she runs into washed up record producer ‘Dan’ (Mark Ruffalo), who hears her play a song.  He falls in love with her style and convinces her to make an album with him.
So we’re in fairly standard rom-com territory, right?  They’re going to make the album and fall in love on the way.  Then it will all turn out beautifully.  They will head off to fame and fortune, hand in hand, to the strains of some irritating boy band.  Well, actually no.

This film is not a rom com at all.  It quietly defies most forms of categorisation (though loosely claims to be a musical). Of course, it would slide into the terribly general category of ‘drama’ (this would be where it ended up in Blockbuster’s shelves if Blockbuster still existed), but it spans so much more.  There is romance in the film.  It’s a film full of love affairs, but not just of the conventional person/person type.  There’s love affairs with New York, love affairs with music, love affairs with creativity over commercialism.  In fact (and I won’t spoil it by giving details) any person/person love affairs are very much secondary.

As mentioned, the film is also of course a musical, though strangely that kind of sneaks up on you.  The only time the characters sing is when they are actually performing in their roles as musicians.  If that hideous moment when someone bursts into song for no reason horrifies you, fear not, you are spared that here.
I guess that it’s when it comes to the music that I have one small issue with the film.  Keira sings her own songs.  She does that perfectly well too.  However, for some reason the classic English actress sings with an American accent.  It grated slightly early in the film, but was soon forgotten.
The supporting cast are great.  Maroon Five’s Adam Levine plays her heel rock star ex-boyfriend believably in his first film role.  Other stars from the music world, Mos Def and CeeLo Green make enjoyable appearances.  James Cordon is a by-the-numbers best friend to Knightly’s Greta.  However the stand out performance is Mark Ruffalo.  As Dan he makes a likeable and believable journey from jaded music exec to enthused album producer.

The last thing I’ll mention is the film structure.  After the initial scene we go back in time twice to see how Dan and Greta arrive at the bar where they meet.  I personally love anything that dispenses with a linear narrative.  Whilst this isn’t in any way ground breaking, it is well realised and easy to watch.

So, as I said, go and see it.  However, aware as I am of cinema prices these days, I will pose the question; is it worth it on the big screen?  For me, it was, but then I am an unashamed cinema addict (with a monthly pass).  Realistically, you could wait a few months and watch this at home to save your pennies.  But if you do, I may become very very disappointed with you.