Today I am delighted to welcome back my good friend John Scotcher to the Blog for another one of his fab film reviews. Nik may have taken over the reigns last week with his review of Edge of Tomorrow, but John is now back in his rightful place with this rather splendid review of Malificent. John is a film expert and an avid writer (he has his own novel coming out at the end of the year) so he has the perfect credentials for this role.

When Kelly and I were at university, we lived next door to one another. I lived with a guy and two girls, Kelly with a guy and two further girls. We all lived in each other’s pockets. It may have well been one house really. As the basic maths above will indicate, the guys were outnumbered. Thus we ended up watching a lot of Disney.
As we were on a creative arts course, centring on the post modern world (yep, they really fed us that kind of line), I was able to put away my natural dislike of the world of Disney and instead enjoy pointing out things like the inherent racism and the enforcing of the gender roles. I got a lot of cushions thrown at me and on one memorable occasion, a gravy covered dumpling (never, ever have a pop at the lobster from the little Mermaid in a room full of fans).
Anyway – why am I telling you this? Basically to try and give you a little bit of a background to my attitude to actually paying to see a Disney movie. Which I have just done; Disney’s ‘Maleficent‘

I was going to review ‘The Other Woman’ for this blog, but I saw it weeks ago and it seemed a little too long to make it current enough for a review. (Funny. Easy on the eye and brain. Watch on DVD. There, done). Instead, I thought that for this one I would get up on a Sunday, see the film in the morning and write the review immediately afterwards whilst it was fresh in my mind. Unfortunately there were a few errors to my basic plan.

I won’t bore you with too many details, but suffice to say a few hours sleep and a hangover do not really go very well with getting up early and sitting in a cinema full of excited children. Not to mention the slightly worried looking parents thinking “Who is the beardy weirdo that smells of wine and comes to the cinema on his own on a Sunday morning? Is he here to steal our children?” Relax, parents. The last thing I want to do is steal your noisy, ice cream covered children. Unless they happen to some Alka Seltzer in their pockets.
So basically, even if I was about to spend a couple of hours with Angelina Jolie, I was not in a particularly receptive mood. However, now I am home and have re-chained myself to the desk, I can tell you that this is a great film and one very much worth seeing at the cinema. 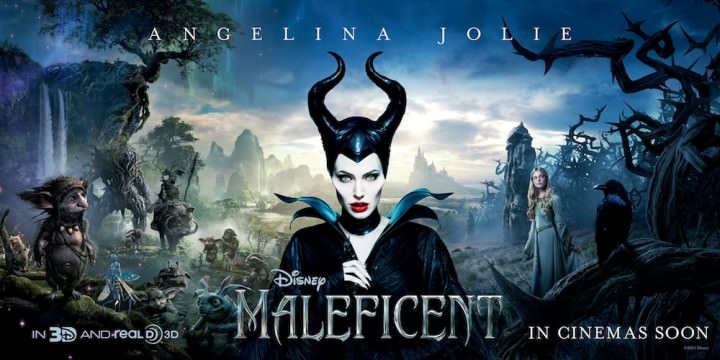 The premise you probably already know: The story of Sleeping Beauty, retold from the point of view of the villain. The villain in question is the title role as played by Angelina. We see her grow up in the fairy kingdom, come to understand what turns her from the wide eyed flitty-fairy of her childhood into the high cheek-boned queen bitch she becomes. Finally we see the events we already know from the legend.

Now this isn’t the first time revisionist fiction has applied itself to famous fantasies. Its been done brilliantly in the book ‘Wicked’ and subsequent musical. We are very much in the same vein here. Whilst this is a little less clever it is no less enjoyable.
Of course it looks fantastic. If you are taking the kids, then 3D is a must. (An aside – 3D movies are the only time that I choose to sit about three rows from the front. What is usually far too close in 2D actually works as a very immersive experience in 3D. Try it.) The sumptuous fairy world and all it’s fantastic creatures are what 3D was created for. It seems to work so much better on CGI characters. It’s very easy to get lost in the immediate beauty of the film, before the main story has even started.

When the main story does start, it is clear very quickly that this is the Angelina Jolie show. In a lesser actress that might be self indulgent, but here you won’t care. Angelina takes the relatively good script and brings Maleficent to life. There are some elements of the character as written that ring a little untrue (ok, she’s got wings and horns, so perhaps I should be more open minded), but when performed they are instantly forgiven.

There’s a great supporting cast too – Imelda Staunton, Juno Temple and Lesley Manville as the fairy godmothers are entertaining, as is Sam Reilly as Dieval, Maleficent’s henchman with a heart. Ellie Fanning (Dakota’s younger sister) makes a believable Aurora, if a tad sickly sweet. Less believable to my ear was the fact that most of the denizens of the human kingdom were Scottish. I’m sorry, but I have gotten used to a diet of Harry Potter and Lord of the Rings, thank you. Most characters in fantasy film should have an English accent. Fact.
The story does what all good fairy tales should do. It makes you laugh. It makes you cry (though I used to cry at ‘Cilla’s Hearts of Gold’, so may not be the best judge). It makes you root for the goodies and wish ill on the baddies. And like all good fairy tales, it has a message: Don’t let hate and revenge consume you – the only one you’re really hurting is yourself. Finally, it keeps you completely engaged for the hundred or so minutes you are watching.

So to conclude: Go see this one at the cinema, it’s absolutely worth it. Take the kids. And if you see a bearded man on his own, with blood shot eyes and a vague whiff of merlot about him. It will likely be me. Get them to pop me over some painkillers.