Happy Friday everyone! I don’t know about you but I’m ready for the weekend! Have you got anything good planned? If you are off to the cinema this weekend then todays film review is just for you! it’s all about one of this summers BIG blockbuster films, so if that is your bag then read on! Big thanks to my husband Nik for reviewing the film for me, her went this week on a preview showing, while I stayed at home and looked after baby bump Hood.

I’ll pass you over to Nik and let him tell you about the film.

This week’s book review is of a summer blockbuster of the celluloid variety! Not that I haven’t read a book this month (you will see that review in a couple of weeks) but thanks to my mum’s membership of Times Plus, I managed to see a preview screening of the new Tom Cruise / Emily Blunt movie – Edge of Tomorrow. Firstly, apologies to Jon Scotcher for moving in on your movie reviewing territory, but given that the film is only released today, I thought I would share my views with you all.

Doubtless you will have seen Tom and Emily on the press junkets all week and seen their ‘chemistry’. Quite why we are forced to watch these is beyond me, but whenever a new film comes out, the leads ‘have always had sooooo much fun on set!’ and ‘they are the best actors I’ve ever worked with!’ etc etc. Anyway, enough of my cynicism, let’s get to the film! 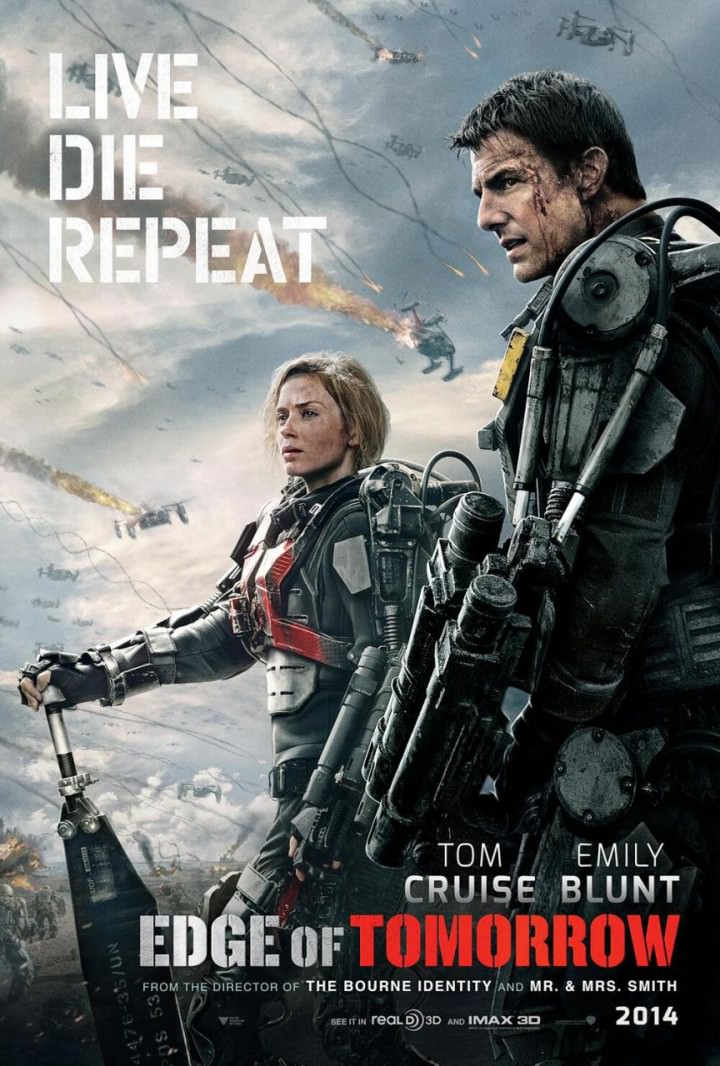 Despite my affliction to pained interviews with breakfast presenters (as I write this I am watching an interview with Hank Marvin that is equally awkward!), this film is an absolute riot! I LOVED it! The easiest way to describe this movie is to call it a cross between Groundhog Day and Cloverfield, with a twist of District 9. Now, my assumption is that you have seen these films, but if you haven’t, read it as – Comedy, Alien Invasion and Intelligent Alien Life Forms.

We first meet Major Cage (Tom Cruise) via a video on a newsreel promoting the United Defence Force with the usual ‘real’ clips of BBC News presenters (I secretly like these in movies and think they add an authenticity!) The UDF are facing a global takeover from ‘Mimics’ who are currently attacking mainland Europe – next stop; London! The UDF have had their best success in the Battle of Verdun and we get our first glance of Rita Varatski – The Angel of Verdun (the absolutely gorgeous Emily Blunt – sorry Mrs Hood!) As a US Army marketing expert, Cage is not on the frontline and comes to England via helicopter in to Trafalgar Square (brilliant) to speak with General Brigham (Brendan Gleeson) to discuss the spin he is going to put on an invasion in to France tomorrow (echoes of the D-Day Landings which have their 70th Anniversary just a week after release – not sure how I felt about this??) Brigham has other ideas! Cage is to be sent to the frontline as a soldier! Some out-ranking posturing results in Cage being arrested and sent to a Forward Operating Base – Heathrow!! As a deserter!

What we next see, will not be the last time we see it! This is where we meet Major Sergeant Farell (Bill Paxton), a classic Drill Sergeant. We get to see a bus go passed with an advert showing a picture of Vrataski and graffiti stating ‘Full Metal Bi**h! Farell gives Cage a warm, army welcome complete with speech and introduces him to his unit – a right motley crew!
As this is a Sci-Fi, the soldiers are suited and booted in exo-skeletons that are fully laden with massive machine guns or rocket launches or claymores or whatever other fantasy a guy could dream off! This guy anyway! The planes are also fully idealised and I loved them too!! So, off we go to battle!!

I was fortunate enough to see this film in 3D and the first time we see a battle scene, it is worth looking like the aforementioned Hank Marvin in dark rimmed and lensed glasses indoors! Action, Action, Action! Fantastic!
Now, to tell you anymore, would spoil your movie going experience, but suffice it to say, this summer blockbuster has it all. Big action, laughs, an almost love story – indeed, I was worried that it would veer in to a schmaltzy mush, but I was wrong which pleased me! I have not seen as good an action movie since Cloverfield, or a huge interpretation of a comic (this film stems from manga novel All you Need is Kill by Hiroshi Sakurazaka) since Avengers Assemble. This film is a must see and I am even considering going to IMAX to watch it again.

The man sat to my left said as we left ‘You clearly enjoyed that movie!’ – And yes, sir, I did!

Edge of Tomorrow is released nationwide 30th May 2014 – I would be pleased to hear your thoughts if you catch it!